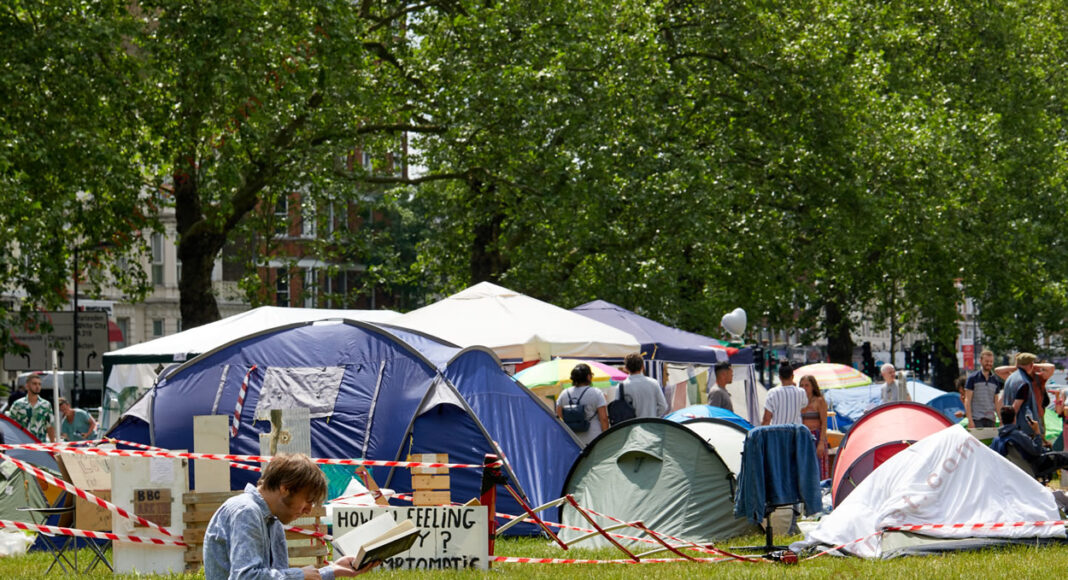 Amongst the more interesting protests I have witnessed against government measures during the coronavirus pandemic has been a collective of people known as ‘Lovedown’ who have taken to camping outside as a visible sign of their opposition. The group of protestors, opposed to the lockdown and a number of other measures, set themselves up on Shepherd’s Bush Green on 31 May 2021, two days after part of a large anti-lockdown march through central London had headed to the nearby Westfield shopping centre. Around 20-30 tents were established in an area of the southern part of the Green, adjacent to the A402. As far as I could see, the protestors were friendly and welcoming towards others. Small groups would periodically take turns to hold placards and give out leaflets at passing traffic calling for freedom and asking vehicles to beep in support. The noise of car horns, however, did upset a number of local residents.

The local Council, the London Borough of Hammersmith and Fulham (LBHF) sought to remove the camp by obtaining a High Court eviction notice. The 15 July was scheduled to clear the camp. Bailiffs from eviction specialists National Eviction Team (N.E.T.) turned up to remove the camp, with police and some main-stream press photographers in-toe. However protestor numbers had swelled and a decision was made to postpone the clearance. Two days later N.E.T. returned in the early morning, assisted by a very large police presence, evicting the protestors from the Green and demolishing the camp. Scuffles broke out and a number of protestors involved with the camp were later arrested after the eviction when police followed members as they left the area, citing a Section 35 Dispersal Authority issued by Hammersmith and Fulham police as a reason to arrest those to did not vacate the area when told to.

Fearing a return of the camp, LBHF fenced off the entire Shepherd’s Bush Green for a week following the eviction, employing 24-hour security to monitor it. They also fenced in the Green during most of the weekend of 26-27 June, when another large anti-lockdown protest was being held in central London. However these measures seem to be a waste, as the lovedown collective had already moved on, deciding to establish a new camp at Clapham Common in the London Borough of Lambeth.

These images are a gallery of some of the photos I captured from the latter days of the protest camp and of the day of eviction (click on any image to view all as a slideshow):