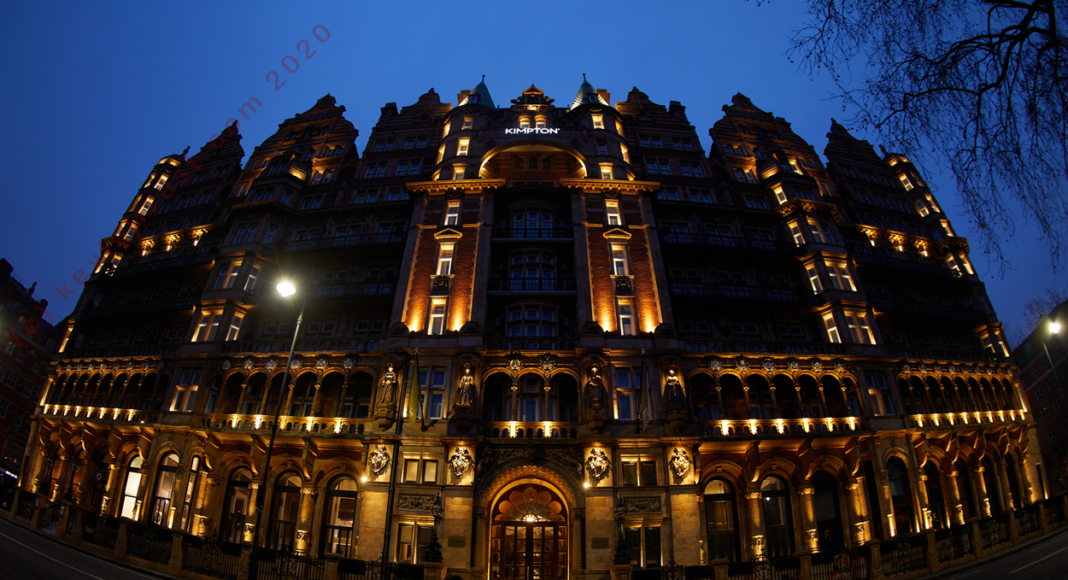 One of my favourite buildings in the capital is the flamboyant former Hotel Russell (currently the Kimpton Fitzroy) in the north-east part of Bloomsbury’s Russell Square. Originally marketed as enjoying a healthy location well removed from the noisy traffic the constant roar and flow of vehicles heading north on the A4200 from the centre makes it difficult to appreciate the beauty of the decoration that adorns the huge French Renaissance style facade. The main image was photographed with a 15mm fisheye lens to fit the extensive front facade in. I took this in the dawn hours of New Years Day 2021, a time that would have low traffic going past.

The Hotel Russell was built for the Frederick Hotels group in the last decade of the C.19 and opened to the public on 2 June 1900. The building was designed by Charles Fitzroy Doll, the then surveyor for the Bedford Estate. Doll would later design a first-class restaurant for the doomed White Star liner Titanic that was said to be a close replica of the Russell’s own dining room.

The hotel was built in the flamboyant French Renaissance style which were derived from engravings of the Chateau de Madrid, a Renaissance building in Neuilly, near Paris, built in the early 16th century but demolished in the 1790s. Furniture for the new hotel was supplied by Maple & Co., a British furniture maker who were based in Tottenham Court Road.

Frederick hotels also owned the Hotel Great Central (now the Landmark London) on Marylebone Road, built to serve the nearby Marylebone station, as well as a number of provincial hotels. Whereas the Great Central was promoted for its proximity to the railways, the Russell was marketed for being away from the noise of the stations and and adjacent to the tranquility of Russell Square, one of the largest of London’s garden squares.

The most Delightful, most Central, and Healthiest situation in London. Within touch of the great Financial, Commercial, Legal, Judicial, Medical, Dramatic, Literary, Art, Social, and Parliamentary centres, all the great London Termini, and shopping thoroughfares, yet quiet, and restful amid its well-ordered surroundings and the green parterres and grand old trees of historic Russell Square.

The Frederick Hotels group ceased to exit in 1967 when it was purchased by the hotels division of the Forte Group hospitality company. In the early 1970’s Forte undertook a major renovation of the Hotel Russell including ensuring a bath was installed in every room.

Sadly the Hotel Russell has lost the name it had for over a hundred years, recently changing names twice in as many years to fit in with corporate identity branding, becoming the Principal London and shortly after gaining its current name of the Kimpton Fitzroy. After an £85 million refurbishment between 2017-2018, which saw the hotel close for a year, it now has 334 rooms offering accommodation. The building was listed in 1970, and currently has the the protection of a Grade II* listing.

We Do Not Consent Rally.