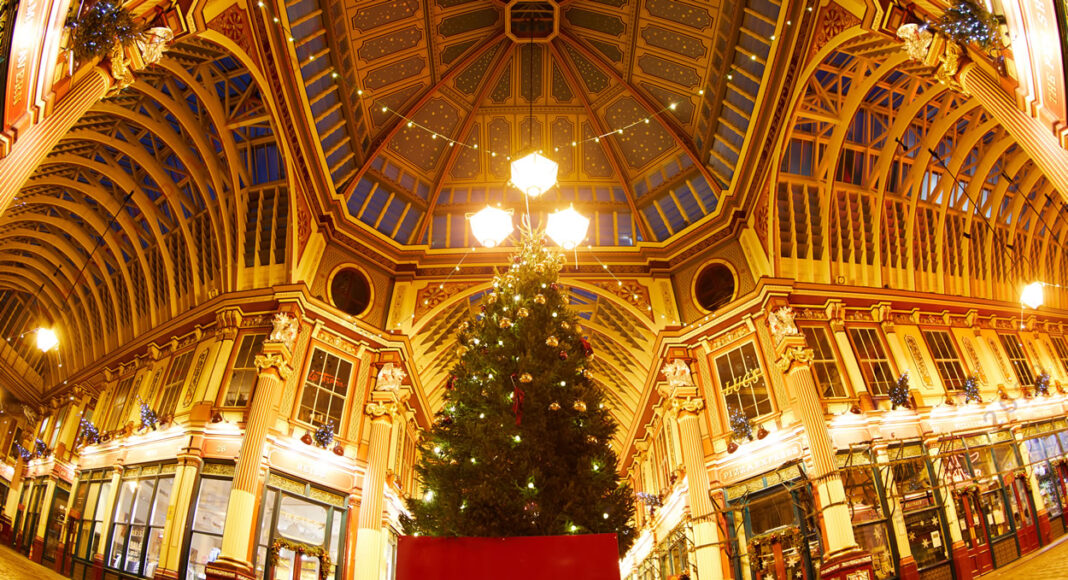 A Christmas tree stands below the central dome of Leadenhall Market as part of the areas festive display for Christmas 2020. Dating back to the 14th Century, Leadenhall is one of the oldest markets in London. These pictures were taken using a 8-15mm fisheye, an extremely wide-angled lens that distorts the sides of the image but can make an interesting effect when trying to cram a large area into one photo.

The current Leadenhall Market was formally opened by the Lord Mayor of London at a ceremony on Friday, 16 December 1881 as a result of the Leadenhall Market Bill, passed in 1879, which abolished the old market The new market took the form of two cross roads, the main one extending from Gracechurch Street to East India Avenue, the object being ultimately to carry it through into Lime Street. The second road crosses from Leadenhall Street to Lime Street, tho centre being marked by a handsome dome, supported by 12 iron pillars, surmounted by griffins.

Every day in December 2020 I will be posting images of the best festive lights that I have seen adorning London during my walks. I have been taking these images mainly in on early crisp mornings when i find the light is better and there are less people about to walk past the camera whilst it tripod mounted. Most are confined to central London due to travel restrictions during the coronavirus pandemic. You can view the images of other festive lights using the link below (the number corresponds to the day in December they appear).